Broking Executive Michael Gosbell talks to us about his passion for motorcycles – from his first bike to his dream bike – and why he loves heading up the Torque Bike scheme for motorcycle dealerships.

How did you get started in insurance?

My career started at a large insurer, initially, before I moved to a local brokerage, working on their schemes team. They had a focus on general Motor Trade Insurance where I gained lots of skills and experience. I’ve stuck with it ever since

I joined One Broker around 18 months ago and I was specifically looking for this position [with Torque Bike]. I went looking for a local broker specialising in motorcycle motor trade and came across Torque Bike. I wanted to apply my love for motorbikes to the work that I was doing in insurance.

What’s the best part of your job?

Talking to clients and building rapport. I will talk to clients for ages about bikes or upcoming events long before we start talking about insurance!

Have motorcycle dealerships seen any common challenges over the past year?

The most common thing I’m finding at the minute – aside from the pandemic – relates to secondhand sales. Dealerships can’t get stock at the minute.

From what I hear, there aren't many new bikes coming into the country right now, so few people are buying new bikes, which means there aren’t as many trade-ins to sell on.

Are there any misconceptions around Motorcycle Motor Trade Insurance?

There are a couple.

Lots of businesses believe that insurance companies are going to try and wiggle out of a claim. I hear that at least once a week, but it’s just not the case. There are claims handlers working for that insurer who are normal people who are there to do a job. They have a set of rules they need to follow and if a claim is right they will pay a claim.

The second misconception is that a motor trade policy allows people to ride whatever they want, whenever they want for whatever they want. Again, that’s not the case. Motor Trade Certificates of Motor Insurance often cover certain people within the company when driving a variety of vehicles, but you can’t jump in any vehicle whenever you need to. It needs to be related to the business most of the time.

How long have you had a motorbike?

Ever since I was 17. My brother-in-law had a Honda Firestorm and, although I was too young to ride at that point, I thought it was the coolest thing in the world. He had a special paint job with a specific sponsor, which is very hard to get hold of these days. From the age of 12, all I wanted to do was ride.

What was your first motorbike?

It was a Peugeot Speed Fighter 2, which is a 50cc moped. Like most youngsters in the UK, I started on the 50cc mopeds and it grew from there!

What do you currently ride?

I currently ride a Harley-Davidson Soft Tail Sport Glide. It’s a mid-size Harley-Davidson. I was riding a late-noughties Harley Davidson Dyna Wide Glide but I wanted something a bit more versatile.

Initially, I didn’t like my current bike because of the front fairing it had on it. When I found out the front fairing was removable, I sat on it and instantly fell in love. It does everything. It’s the Swiss Army Knife of H-Ds. It’s got removable panniers, fairings, adjustable preload and all sorts of stuff. It does everything I need it to do and I can change it to suit my needs on a daily basis within 3 minutes.

Are there any motorbike tours you’d love to go on?

The dream, at the minute, is a UK trip. I realised I’ve never been down to Cornwall and I’m desperate to get down there to have a crack at surfing. So this summer’s ride is down to Cornwall.

I’ve got a set of guys I ride with all the time, including my brother-in-law, who is now on a Harley-Davidson! When I bought a Harley, he followed my lead and now rides with me!

What is your dream motorbike?

This is so cheesy, but I’ve got my dream bike! But if I couldn’t have my Sport Glide, I would have a brand new Harley-Davidson Fatboy. It’s basically what I’m riding at the minute but it’s got a bigger back tyre. It’s a big, fat lazy cruiser and I love it.

If you share Michael’s passion for motorbikes and want to discuss your dealership’s insurance needs, don’t hesitate to contact the team on 01603 218290.

We’ve put together an overview of the facts about driving in the EU so you understand your obligations post-Brexit.

Thatched Property in the UK

One Broker takes breaks takes a look at the number of thatched properties in the UK and their core statistics. 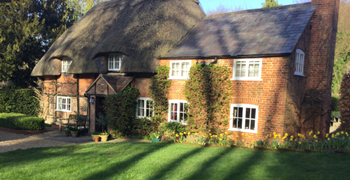