We’re pleased to announce that Director John Knowlden celebrated his 30th anniversary with the business in February 2021.

Having launched his own firm in 1991, he joined forces with Jon Titlow in 1992 to form Knowlden Titlow Insurance Brokers (later KTIB), based at Tavener Square in Norwich.

From the outset, the company grew steadily, achieving a turnover of £4 million within five years. That growth trajectory continued for many years, with a team of 35 employees on the payroll by 2010, many of whom are still with the business to this day.

In May 2010, CEO Robin Plaster became a majority shareholder in KTIB. The move saw the company join NW Brown Insurance Brokers and PJ Weller & Son as part of One Broker Group.

Since then, the group has gone from strength to strength, with performance further shored up by Gibbs Denley Insurance Services, which joined the group in 2017, increasing the Group’s footprint in the Cambridge area.

Says John Knowlden: “A lot has happened over the last 30 years but our work ethic has remained the same: We are insurance brokers and risk advisors. We strive to offer our clients the best possible advice and service at a competitive price, while providing the best possible work environment for our team.”

Adds Group Managing Director Sean Clark: “This 30-year milestone is a fantastic achievement and we’re delighted to have shared it with John. His drive, dedication and knowledge have been fundamental to One Broker Group’s ongoing growth and success.” 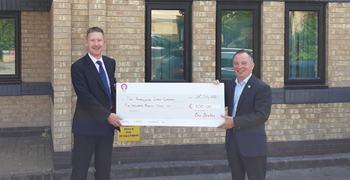 One Broker Ambulance Names TASC as its Charity of the Year

One Broker Ambulance is delighted to announce that it has named The Ambulance Staff Charity (TASC) as its Charity of the Year 2021/22.

One Broker Teams Up With Cambridge Utd

Find out more about our new 18-month sponsorship deal with Cambridge United FC as part of our ongoing commitment to supporting the local community.

Paul Gibbs celebrates 30 years in insurance broking with One Broker